Despite Chelsea dropping to sixteenth place, Michael Emenalo, Abramovich’s closest aide, believes that Mourinho should be able to turn things around this season.

In speaking with The Telegraph, he also mentioned that the Premier League Champions were trapped in “negative momentum” but this decision to back Mourinho has come from none other than the Russian owner himself.

Emenalo had made the decision to speak publicly because Mourinho has too battles of his own to fight recently. Not only has he had to serve one game stadium ban but also lost that game to Stoke as a result. 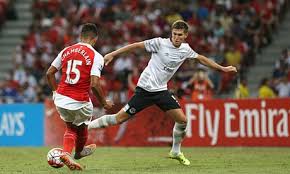 Just this season alone, he has been charged twice by the Football Association for disciplinary issues related to referees. Emenalo agrees that it is important for Chelsea to be represented “with a certain level of responsibility”.

Being a former Nigerian international, Emenalo was brought in by the previous manager Avram Grant and promoted to technical director in 2011. As a result, he has been responsible for club recruitment at both the academy as well as first-team level.

Most people regard him as well as club director, Marina Granovskaia, to be the closest individuals linked with Roman Abramovich.

After the club had lost to Southampton, and based on Mourinho’s requests to do so, Chelsea issued a clear statement saying that they were fully behind their manager. After that, the club has played three games and where they have won only once.

It’s clear that as they face Norwich City over the final weekend of November, Mourinho is still trying to stop what is now one of the biggest collapses in Premier League football.

View all posts by admin →
Klopp signs with Liverpool Amidst Widespread Approval, Won’t Be An Easy Task Paul Berlenbach: The Astoria Assassin