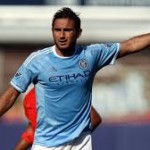 Frank Lampard has brushed off the criticism after the booing by the New York City crowd. The New York City FC Midfielder had just endured a 7-0 to their local rivals, the New York Red Bull. It was Lampard’s MLS debut, and although he was playing with an injured calf, the fans vented thier frustration… Read More