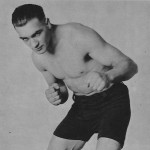 By Phineas Upham The so-called “Astoria Assassin”, Paul Berlenbach, was light-heavyweight champion of the world in 1925. He was known primarily for his colossal punching power. Being a former AAU wrestler, the transition into boxing was fairly logical. Especially in the context of boxing’s rise to prominence, which began with wrestling. Berlenbach was, by all… Read More