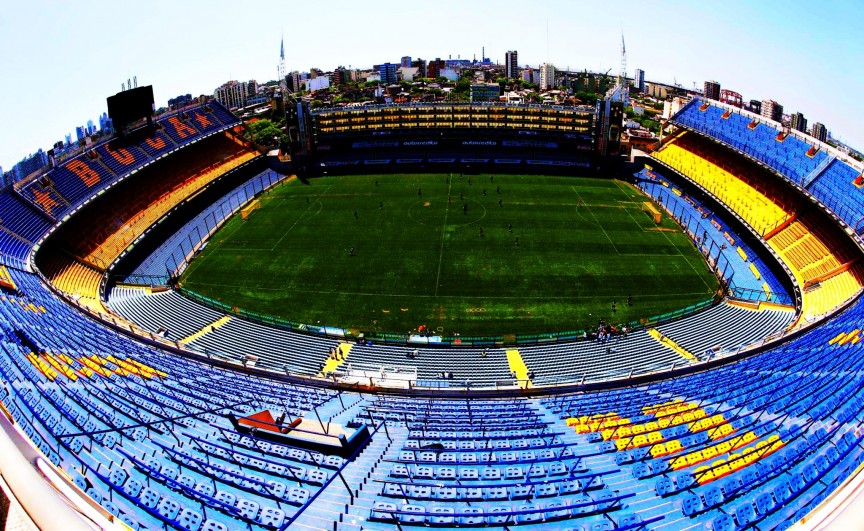 These stadiums house some of the most resilient architectural designs in the entire world. Soccer is a sport that has become a lifestyle and culture for many. Everything from dressing up in their favorite team’s soccer uniforms on game day to screaming shouting at the top of their lungs on game day, this sport has grown to become a worldwide phenomenon. This list will cover the top five stadiums that, if you haven’t already, worth visiting.

Fans from all around the world come together from Mexico to England. The raging question, “Where will the next World Cup be held?”

Located in La Boca, Buenos Aires Argentina, this stadium is known for its chocolate box shape and architecture. Ironically, La Bombonera is translated to “The Chocolate Box”. Not only is this stadium one of the most popular stadiums in Argentina but it also holds a capacity of 49,000 fans. Around the stadium you will find murals painted by natives of the country that depict Argentina’s cultural connection to soccer.

Wembley Stadium holds truth to England’s love for soccer. Located in London, England, this stadium holds a capacity of 90,000 fans. If you plan to visit Webley Stadium you’re definitely going to want to take stroll around the beautiful setting to walk along the grounds of legends.

Santiago Bernabeu is a spectacular all-seat stadium in Madrid, Spain. It’s the home of the esteemed Real Madrid soccer team. Whilst exploring the inner depths of the stadium, you’ll get the chance to witness one of their prized sections where you can take a look into their iconic dressing rooms. Here lie display cases of soccer t-shirts and jerseys from some of the most beloved and respected players in history.

Also known as Soccer City, FNB Stadium borders the Soweto area of Johannesburg, South Africa. After receiving a major upgrade back in 2009, it now houses a maximum capacity of 85,000. The design is said to have the appearance of an African pot. The earthen colors and lighting around it simulates a cauldron on top of a fire. After previously hosting the World Cup back in 2010, FNB Stadium has received much praise on its architectural design and remains a top sight to see in Johannesburg.

Built back in the 60’s, Estadio Azteca is the standard playing venue for official matches of the Mexican national team. Located just south of Mexico City, this stadium houses 104,000 seats and offers plenty for visitors to see and do around the area. The nightlife is prevalent in the Zona Rosa area or the Roma area. They also offer guided stadium tours that include the dressing room, dugout, and press room that can be booked on their official websites.